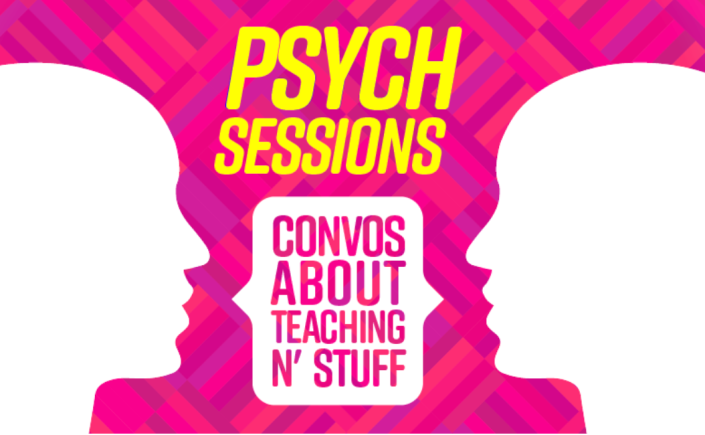 If you’re a psychology instructor, one of the coolest resources around is the PsychSessions podcast. This podcast was created by instructors Garth Neufeld and Eric Landrum and focuses on the teaching of psychology. They connect with top psychology educators as well as up-and-coming superstars to have deep conversations about what it means to be a teacher of psychology.

We had the chance to interview Garth and Eric to learn more about their podcast and advice they have for fellow psychology instructors.

The following interview has been lightly edited for content and clarity.

What led you to create PsychSessions?

We discovered that we were both individually interested in started a podcast—something to do with the teaching of psychology.  And we both had the good fortune to share that interest (independently) with our mutual friend Sue Frantz at Highline College.  Sue provided the matchmaking service. Additionally, we both saw the opportunity to get great ideas about teaching psychology, which were primarily being distributed in journals and at conferences, to the general public and to teachers who either didn’t have access or didn’t have time to invest in professional development in traditional ways.

Can you share an example of a story or teaching advice from a guest that has made an impact on you?

Eric: It really is difficult to limit myself to just one story or one example of impact.  But when pressed, I would have to say the interview with Bethany Fleck Dillon (Episode #28) from Metropolitan State University-Denver.  It was such an honest and open interview.  She talked about her ‘mommy guilt’ as a faculty member and I talked about my divorce.  Those types of conversations remind us not only of the complexity of others’ lives, but also that the impressions we see on social media are not representative of our real selves.  We tend to post our best moments, and not our real moments.  I love this podcast episode because I feel like we truly captured real moments.

Garth: I have found the podcast to be a tremendous source of professional development. I can barely believe that I had the opportunity to sit down with both Charles Brewer and Bill McKeachie before they left us. When I met Brewer, he was a force; his intensity was remarkable, even in his final months. And McKeachie was pure kindness. I learned from Bill that this is the best way to move through the world, and he did it with such grace, both privately and publicly. Surely Bill’s legacy is more about who he was than what he accomplished (which was incredible).

Do you have an episode you’d recommend for a first-time listener who teaches Intro to Psych?

Eric: It’s really bad form to play favorites with one’s children, because we are supposed to love them all equally, right?  I’m afraid I can’t name names here. But we have plenty of textbook authors, leaders of national organizations, teachers at all levels (graduate school, community college, college, university), a mini-series devoted to the introductory psychology course, short sidebars that focus on one topic, and we are about to launch a new feature called AskPsychSessions.  Folks sent us their questions about the teaching of psychology (or just teaching in general), and we wrangled experts in the field to provide answers.  We’ll release the question and answer together is short micro-episodes so that listeners can binge-listen as much as they want.

Garth: I’ll play it safe here, too. I think that most people begin with “Episode 2: Origin Stories” to get a feel for what the podcast will be like. Eric can correct me, but I think that is our most listened to episode. Now, that’s just Eric and me talking, so I don’t think it’s the best content we have on the podcast, but it probably is the best place to start. Many of our colleagues look for episodes with their favorite psychologists and educators. I find Eric’s “liner notes” to be really helpful in determining which episodes will be of most interest. We also have a brief overview (five minutes) before the episode begins.

Your website describes your podcast as “Convos about teaching n’ stuff.” Can you elaborate a little about the “stuff”?

We rarely talk for an hour about teaching only.  The backstory / origin story of our guests is fascinating.  Even when you meet up with your best friends at conferences, it’s rare that you would ask them if their parents went to college, or if they played a musical instrument in high school, or if they were a psychology major when they started their undergraduate course of study.  These types of questions have led down fascinating conversational pathways that we never would have imagined.  So, the podcast/interview platform is really so much more than about teaching.

How do you choose your interviewees?

The first part of the formula is about who we know in the teaching of psychology world, and fortunately, collectively we know a lot of teachers of psychology.  So, we can ask for the favor of an hour of a person’s time, and almost everyone will say yes…eventually.  The second part of the formula is who will be at a particular conference when Garth and/or Eric will be there.  We really are committed to recording our podcast interviews in person.  Not only does that help with sound quality, but the face to face nature of the interview is meaningful; laughing together in person is different than laughing together over a phone line.  The third part of the formula is thinking about guests who we think our listeners would enjoy—but here’s a secret: we have discovered that every teacher of psychology has an interesting story to tell, no matter where they are in their career or what school they are at.

What are one or two lessons you’ve taken away so far hosting your own podcast?

Eric: One lesson is that this little idea that I once shared with Sue Frantz has turned into this important collaboration with a person who has become one of my best friends on the planet, Garth Neufeld.  We had no idea that people would listen, and we really didn’t set out to become oral historians for the teaching of psychology.  I wanted to do something different and stretch my skill set and see if I could make an impact in a way other than conference presentations, book chapters, and peer-reviewed journal articles.  The other lesson that I have learned is that the podcast can be a vehicle to promote others and their work.  It is a way to help our colleagues gain attention.  I have discovered that the imposter syndrome continues to exist among faculty members coupled with high levels of humility; the podcast platform allows me to showcase their work in such a way so that they are not bragging about their work, but I get to brag about their work.  And the podcast has led to other entrepreneurial opportunities that are just plain fun!

Garth: Well, how do I top all of that? The most important lesson I’ve learned, apart from what Eric mentioned above, is that it is exciting to follow our creative instincts, and that the first step is the first step. As it has been said, you eat an elephant a bite at a time. It’s overwhelming to think about how to create 100 episodes, which we will hit in the new year. But it isn’t overwhelming to think about having a conversation with a friend about a crazy idea you have for an innovative way to serve your profession.

Check out the podcast here: https://psychsessionspodcast.libsyn.com/.

R. Eric Landrum is a Professor and Chair in the Department of Psychological Science at Boise State University, receiving his PhD in cognitive psychology from Southern Illinois University-Carbondale.  He is a research generalist, broadly addressing the improvement of teaching and learning, including the long-term retention of introductory psychology content; skills assessment; improving help-seeking behavior; advising innovations; understanding student career paths; the psychology workforce; successful graduate school applications; and more. He is a member of the American Psychological Association, a fellow in APA’s Division Two (Society for the Teaching of Psychology or STP), and served as STP President (2014).  In August 2019, he received the American Psychological Foundation’s Charles L. Brewer Distinguished Teaching of Psychology Award, arguably the highest award given to teachers of psychology in the United States.

Garth Neufeld teaches at Cascadia College in Washington State. He is the founder of Teaching Introductory Psychology Northwest and the co-founder of the PsychSessions: Conversations About Teaching N’ Stuff podcast. Garth is the Director of Regional Conference Programming for the Society for the Teaching of Psychology and the co-chair of APA’s Introductory Psychology Initiative. He has served the national teaching of psychology community through the AP psychology exam reading, APA’s Summit on the National Assessment of Psychology, and APA’s Summit on High School Psychology Education. In 2018 Garth was awarded a presidential citation from the American Psychological Association (APA) as a Citizen Psychologist for his co-founding and ongoing participation as president of Shared Space For All, a non-profit organization that educates and mentors at-risk Thai children toward the prevention of prostitution. Garth is also the recipient of the 2019 STP Wayne Weiten Teaching Excellence Award.